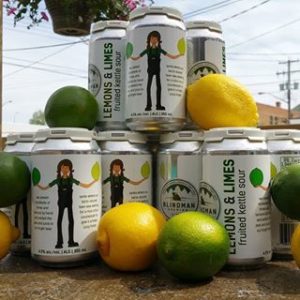 For all of you who are searching for a new kind of patio beer (but with flavour), I think I may have found your solution. What would say to a beer that tastes something like lemonade, something like iced tea but still has a beer character?

If you say yes, let me introduce you to Blindman Brewing’s Lemons & Limes Fruited Kettle Sour (although I am certain they are using “fruited” in an entirely inappropriate way grammatically). As most readers know Blindman has been running an ongoing series of kettle sour beer – beer inoculated with lactobacillus pre-boil to create a fast-acting sour beer. Most of the time they just swap out the hops to see what happens. However, this time for the upcoming summer season, they brewed up their kettle sour with a healthy dose of both lemons and limes to the fermented beer.

And what a difference it made.

The beer pours a deeply murky, almost muddy dark gold. There is no head to speak of. The aroma gives off bright lemon and lime. I find it light, sweet and summery. I also detect some sugary sweetness and light tart character. I also get a little bit of zesty lemon as well. Frankly it smells disturbingly like lemonade.

The taste is similarly intriguing. There is a sugary sweetness up front along with a hint of tannin. The middle sharpens up with a light tartness but also with a fresh citrus flavour. An earthy note also emerges, keeping the beer grounded. The finish is lemony and tart and sweet. The lime is present but plays a supporting role, lifting up the beer and making it brighter and fresher than lemon alone (I have always found limes to be brighter and softer than lemons). The beer reminds me of a lemon-rich iced tea in a way. The tart is present but remains in balance with the other flavours, making for a refreshing finish.

Here is my issue. I can’t decide if this beer is more reminiscent of lemonade or iced tea. There is enough graininess to give a tannin-like character which brings out the tea. But, man, that aroma is straight up lemon/limeade. I like how the sweet, citrus and tart blend together to create a remarkably refreshing and summery beer. Hence my suggestion that this is an excellent patio beer.

My gut tells me this is one of those rare, odd beer that will be a hit both with beer aficionados and reluctant beer drinkers. It doesn’t really taste like “beer”, but it does what it aims to so well that even the most cynical beer geek will have to recognize what is going on here. A masterful effort.

On the subject of merchandising and cultural obsession... by noreply@blogger.com (MRTIM)
Tuesday April 28th, 2015 at 2:49 PM 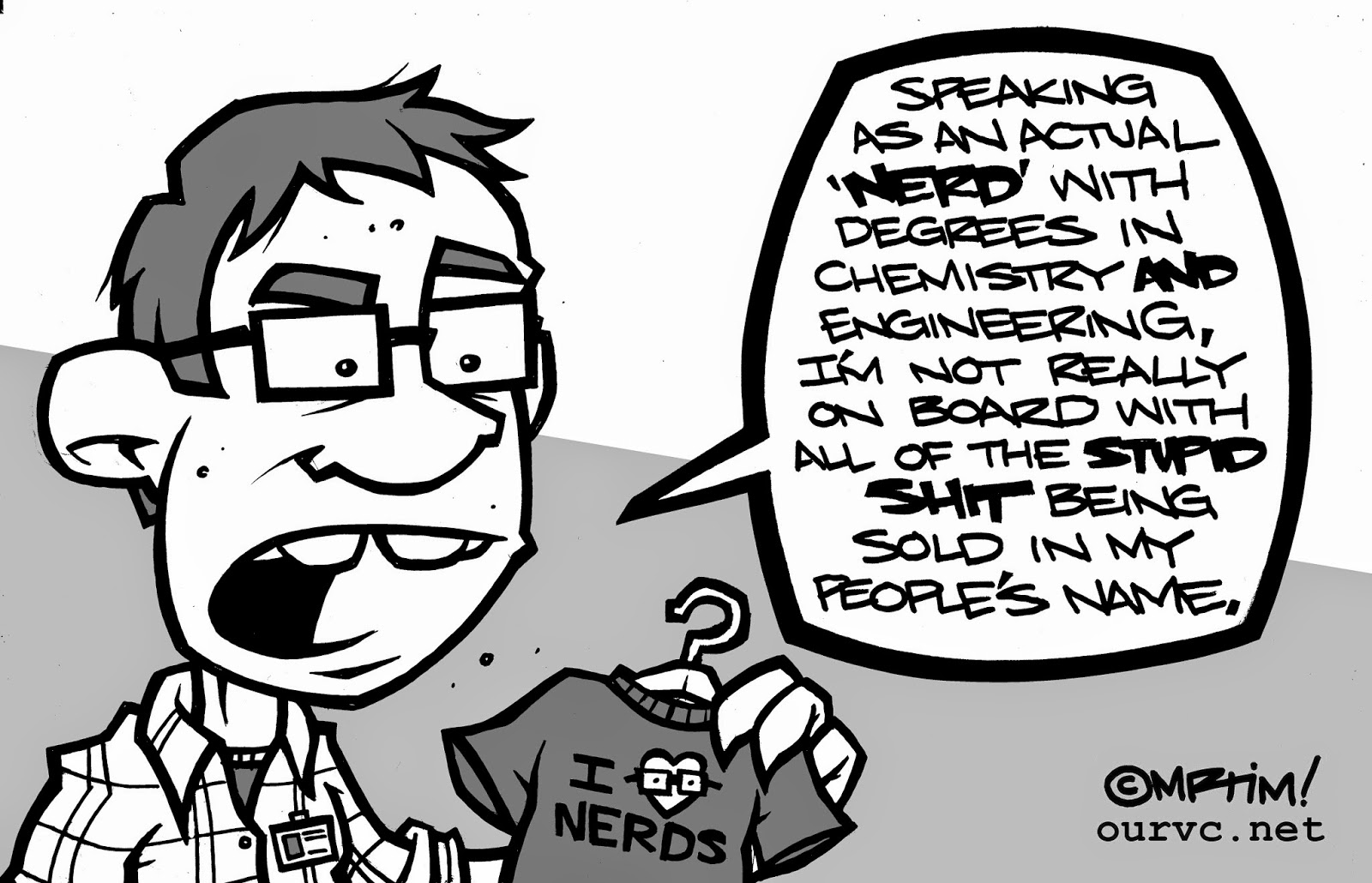 This is a demonstration of increasing technological refinement in computer games: images of Lara Croft over the years.

It desperately needs a key for dates of each of the images.

I’ve never played any of them, so I have an ignorant question: has the game gotten any better over the years? If the technology improves to the point that I can zoom in on Lara Croft’s pores, does that improve the content? It seems to me that focusing on those elements of the presentation which are repetitive and predictable and requires only on mapping textures to smaller and smaller polygons is a poor proxy for actual improvements in the complexity of the worlds being modeled.

Anita Sarkeesian, in an op-ed for The New York Times:

Those who police the borders of our hobby, the ones who try to shame and threaten women like me into silence, have already lost. The new reality is that video games are maturing, evolving and becoming more diverse.

Those of us who critique the industry are simply saying that games matter. We know games can tell different, broader stories, be quirky and emotional, and give us more ways to win and have fun.

As others have recently suggested, the term “gamer” is no longer useful as an identity because games are for everyone. These days, even my mom spends an inordinate amount of time gaming on her iPad. So I’ll take a cue from my younger self and say I don’t care about being a “gamer,” but I sure do love video games.

Exactly right. The dead-enders are lashing out, in brutally ugly ways, because they’ve already lost. But they haven’t even lost their games — all they’ve lost is their de facto position as the only sort of game players who mattered.

merlinblack
reply
'I don’t care about being a “gamer,” but I sure do love video games.'

After that last post, here’s a little palate cleanser: Ocean Atlas, an underwater sculpture of a Bahamian girl supporting the weight of the ocean, by Jason deCaires Taylor. 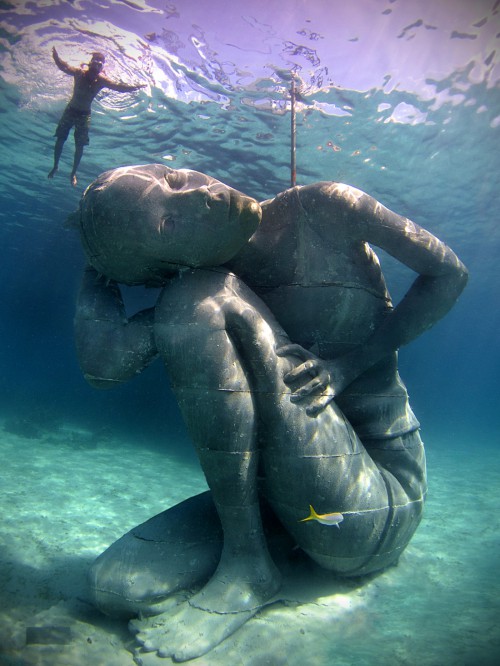 One of the loveliest things about it is that it’s going to get more attractive over time: it’s made of a pH-neutral cement that makes a good home for reef organisms, so it’s going to get gradually encrusted with life. See the link above for more examples of his work.

Charlie Stross just tweeted about Julie d’Aubigny, a 17th century swordswoman and opera singer, who hit the road when her lover killed a man in an illegal duel.

On the road south, Madame de Maupin and Sérannes made a living by giving fencing exhibitions and singing in taverns and at local fairs. While travelling and performing in these impromptu shows, Maupin dressed in male clothing but did not conceal her gender. On arrival in Marseille, she joined the opera company run by Pierre Gaultier, singing under her maiden name.

Eventually, she grew bored of Sérannes and became involved with a young woman. When the girl’s parents put her away in the Visitandines convent in Avignon, Maupin followed, entering the convent as a postulate. In order to run away with her new love, she stole the body of a dead nun, placed it in the bed of her lover, and set the room on fire to cover their escape.[3] Their affair lasted for three months before the young lady returned to her family. Maupin was charged in absentia—as a male—with kidnapping, body snatching, arson, and failing to appear before the tribunal. The sentence was death by fire.

Maupin left for Paris and again earned her living by singing. Near Poitiers, she met an old actor named Maréchal who began to teach her until his alcoholism got worse and he sent her on her way to Paris.[4]

In Villeperdue, still wearing men’s clothing, she was insulted by a young nobleman. They fought a duel and she drove her blade through his shoulder. The next day, she asked about his health and found out he was Louis-Joseph d’Albert Luynes, son of the Duke of Luynes. Later, one of his companions came to offer d’Albert’s apologies. She went to his room and subsequently they became lovers and, later, lifelong friends.

She settled down for a while in Paris. And then…

Her Paris career was interrupted around 1695, when she kissed a young woman at a society ball and was challenged to duels by three different noblemen. She beat them all, but fell afoul of the king’s law that forbade duels in Paris. She fled to Brussels to wait for calmer times. There, she was briefly the mistress of Maximilian II Emanuel, Elector of Bavaria.

Where is the movie treatment? There seems to be stuff in French, and a couple of books, but oh, man — I don’t want to see another Batman or Spider-man movie, but a big-budget blockbuster about Julie d’Aubigny would get me to the theater.

diannemharris
reply
I would watch this movie.

hannahdraper
Rejected Princesses covered this a month or two back. http://www.rejectedprincesses.com/post/93976403868/julie-daubigny-princess-of-the-opera-1670-1707
Next Page of Stories